Summertime is here and to celebrate the fact JOANovARC are proud to announce the release of Seeds Of Summer on July 9th. In your face and full of energy, the vi- brant Seeds Of Summer is released as a limited edition 500 only 7”. Upbeat and happy Seeds Of Summer is taken from their critically acclaimed debut album Ride Of Your Life released on Red Vixen Records. Ride Of Your Life finds JOANovARC at their full creative tilt delivering hard-hitting, retooled classic rock with a modern twist. Describing themselves as “Puss In Boots”, this four piece force of nature have delivered a statement of intent with their debut album. Produced by Grammy Award winning Gil Norton (The Pixies, Foo Fighters) Ride Of

Your Life has the essence of an old school record and encapsulates and distills perfectly JOANovARC’s live energy. Ride Of Your Life is the journey of the band’s life from the beginning to present, the ups and downs on the road. “We are all great friends but have been through every- thing together, heartache, death, illness, sweat, blood, great times, addiction, narcotics, break ups, celebrations, fights and tears! “ 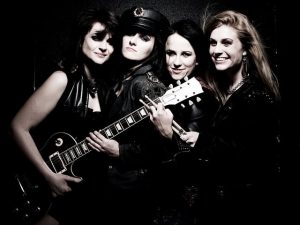 This energetic and diverse album features 11 finely crafted songs full of rock’n’roll attitude and glamour. The opening title track sets the tone for a rocking roller coaster ride, and features the singles; the vibrant yet vitriolic Dragon In The Sky, along with the epic and empowering White Trash, the infectious Live Rock’n’Roll and the feel good joyride Seeds Of Summer. Plus, a further 6 songs, before the spiritually beautiful ballad Peace of Mind closes this sumptuous debut album in the best possible way.

“We are role models, we want to inspire young females and empower them” and Ride Of You Life is an inspiring statement. Thanks to their relentless touring and high energy shows, JOANovARC have earned the title as one of the UK’s most promising rock acts, bristling riffs and jagged, riotous hooks are their poison – exceptional is not too strong a word. Catch the band live, as soon as you can. 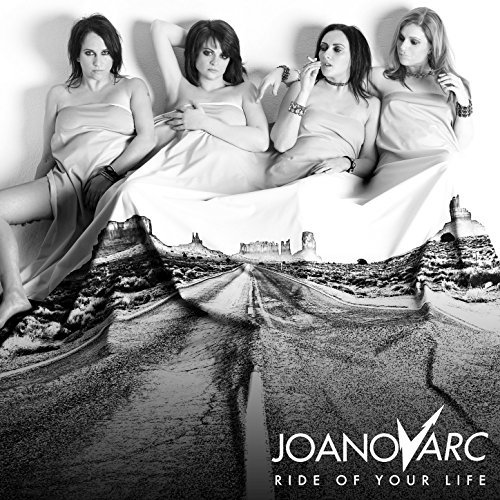 ‘JoanOvArc have something about them that just shouts musical talent, and don’t let the fact that this is an all-girl band, these ladies know how to rock n roll.’
My Global Mind

“JOANovARC delivers classic melodic hard rock for the new century. Get it. Easily recommended.”5 out 5 Dangerdog

“When I heard a preview of Ride Of Your Life , I was interested to hear how they carried themselves live…turns out better than I could of hoped for.”
Devilgate Media

“JoanOvArc really are at the top of their game at the moment.” Dark Lord Of Barnet

“The mix of pop hooks, raw guitar and the glam rock drum sound works well and should see the band find favour and fans on a support slot with a bigger , more established act” Powerplay

JOANOVARC have made a great rock album, one that captures the fun energetic raw sound of a live performance. 4 out 5 Demonzone

“It has attitude , great singing and great instrumental playing . Every- thing you need in today’s album” 4 out 5 Patchchord News

“These girls not only shred, but also give you the ride of your life. Rec- ommended…” 8.25/10 Ravenheart News

“The album is superb! Its fantastic mix of tracks featuring the band at their best is an excellent debut which deserves to be heard.” National rock review

“There are a lot of potential radio hits. Live Rock ‘N’ Roll, one of the singles, is full of rock wit… the entire album in fact is fuelled by it, so fill up the music tank and hit the road!” Rockchickenz

“one of the best all female rock bands around at the moment.. HIGHLY RECOMMENDED…10/10″ Black phoenix riding

Scroll back to top