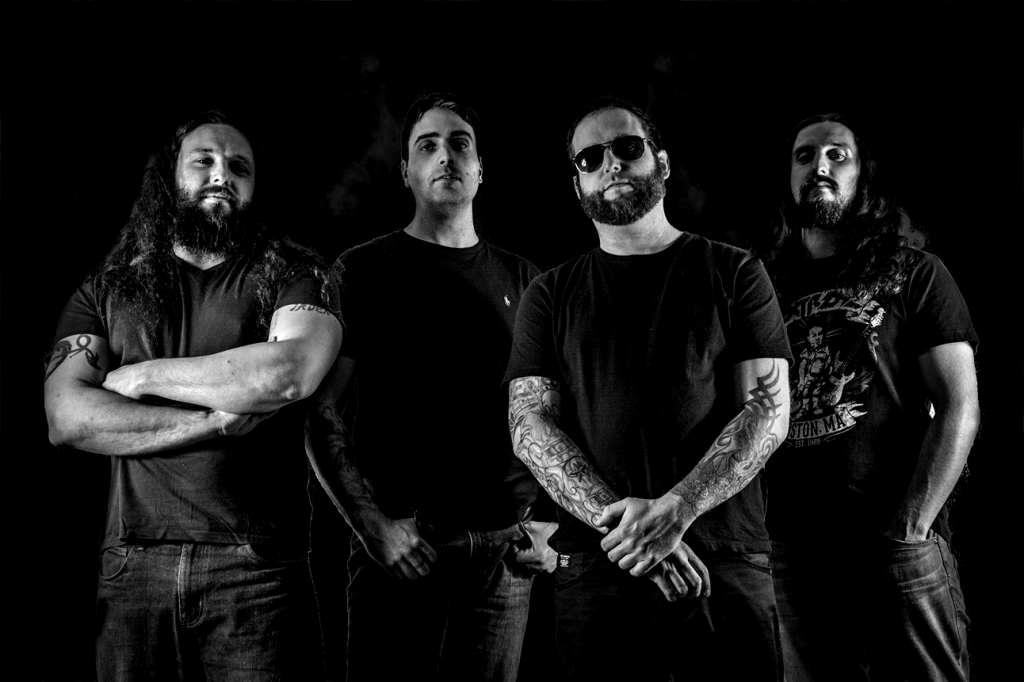 NG26 is a four piece rock / metal band formed by two sets of brothers that come screaming out of Heanor, Derbyshire in the UK. Formed in 2009, NG26 have worked tirelessly to establish themselves as a force to be reckoned with within the metal community and in 2010 / 2011, the band had their first commercial album release with “Open Your Mind”. This critically acclaimed debut release resulted in three massive singles, “One More Road From Home”, “Bring Back The Day” and “Open Your Mind”, who’s promotional videos spent 9 months collectively being shown on Kerrang! TV!, with “Bring Back The Day” being championed by the legendary Malcolm Dome, as single of the week and featured on the Classic Rock Magazine cover-mount CD!. NG26 have toured tirelessly up and down the UK and after the huge success of “Bring Back The Day”, the band embarked on a short UK tour with Girlschool. NG26 have also toured with bands such as :- top Swedish band – Sparzanza, Kill2This, Cyclefly and Area 54 to name but a few. 2012 and the band release the single, “If We Fall Tonight”, which raced up the Amazon Rock Chart to reach top spot!. The band then decided to build their own studio, “Otherside”, so that they could write, record and produce more efficiently. Two more singles and an EP were produced in the early days of the studio, spanning the next 18 months, with EP, “Devil’s Kiss”, storming into the Amazon Rock Chart Top 10!. 2014 and the band embark on a full album recording and have produced, “Until Heart Stops”, which was released April 2015.

Reviews for “Until My Heart Stops”
In the hunt for some prime rock n’ roll which is maybe a touch low on major surprises but has all the attributes and invention, not forgetting rousing tenacity, to start a voracious stomp in a dance hall of wallflowers, then say hello to UK rockers  NG26 and their new album Until My Heart . Loaded with ten hard/alternative rock tracks soaked with metal aggression, the encounter is one accomplished and rigorously solid slab of heavy rock unafraid to flirt with melodic adventure or a nest of squirming grooves. Ringmaster

NG26 have seriously impressed me with their latest release, Until My Heart Stops. There are some wickedly addictive tracks contained in this album that come thundering at you like an enraged bull in a narrow street full of nutters wearing red onesies. There is everything you could ever want contained in this album, hard and heavy grinders, feel good rock, dark, reflective rock and a beautiful ballad, all thrown into this diverse mix that really satisfies. I may have been over critical with a few tracks but they are just blips in my opinion as the band matures in their sound, as does every band over time. This is addictively melodic and the musicianship on show here is immense. NG26 deserve to be massive and for those that like Shinedown, Bullet For My Valentine, Five Finger Death Punch and Alter Bridge, seriously check out NG26 and show them some appreciation.RocknRoll Circus

NG26 aren’t a band short of a following. This was no surprise to me when I first heard their new album ‘Until My Heart Stops’. Consisting of diverse sounds and epic harmonious talent I think this new album is well worth the listen. On par musically with some of the biggest and well known Rock, Metal and Alternative bands from the likes of Alter Bridge, Metallica and Papa Roach I can honestly say NG26 are still doing it for British Rock N Roll. NG26 fans, if you haven’t already, get this gem and definitely add it to your collection. You won’t be disappointed.
ALEX ALICIA MEDIA

From start to finish this album hold no bares. Fact of the matter is, you cannot ignore the musicianship, recording quality and final output that has graced its way in 2015. writing, recording and chipping at milliseconds of music can be cumbersome and draining but to present a thoughtful, clever and heavy piece of work that is all in all ready for radio from start to finish can only mean thing: these hard rock and metal maestros have worked hard, and although this may not be their final master piece and I am sure it isn’t, Until My Heart Stops is now already a good, strong contender for unsigned album of the year. a well deserved 4.5 skull-beanies

Released April 26th 2015, it builds on their previous releases with their customary swaggering, soulful style reminiscent of Alter Bridge and Soundgarden. They reinvigorated the Nottingham and Derby metal scene mid-2007 and have since released three albums. Their guitarist Rich Shaw is also a full-time member of Cradle of Filth Throughout NG26’s releases their tight musicianship is highly evident, yet tastefully applied; they temper blistering guitar solos with artful fingerpicking and atmospheric gothic melodies dropping into groove-laden riffage. Their sound is best described as varied, with moments that swerve toward gothic melodic beauty and others that excel in a doomy groove-driven brutality. This is a band that delegates well and knows how to sense that delicate moment when the bass, guitar or vocals should take centre stage. This is an album with greater depth and far more to offer than you might initially think. Get Your Rock Out May

Melodically furious fusion of massive metal riff’s and catchy as hell vocal’s that is all held together beautifully by a tight as a vice groove driven rhythm section that make all the plaudits this band have received for their live show all the more justified. Powerplay Magazine

superb musicianship and a real English vibe to create a masterclass in modern guitar rock. Everything works to it’s maximum – great vocals, superb drumming, classy guitar skills and beastly bass work and the production values are to die for!  Massive riffs, huge sounding drums, intricate and impressive guitar work and some great vocals make for an album that is packed to the rafters with tunes Outstanding! Rocksounds

imagine if a war-zone had rhythm like one of those musical theatre   productions set in some banana republic, where the actors all dance around, choreographed to the sounof gunfire – while carrying AK-47s….Metal Mouth.

NG26 specialise in full-throttle in your face alternative rock….The Midlands based noise-merchants have taken a leaf directly from the book of rock as written by such luminaries as Creed, Alter Bridge and Shinedown, managing to weld some awesomely memorable chorus’s with very powerful and melodic verses buzzjack.com